This December, streamers will show their speed in the first-ever Chess.com Bot Battles. Featuring Chess.com’s new bot personalities, players of all skill levels will have their chance to beat Danny-Bot, Hikaru-Bot, and others for up to $5,000 in cash prizes throughout the event.

With both open and U2000 sections, this speed-based competition is open to all streamers on Twitch and YouTube who apply (see application below). The event will start on Friday, December 4, at 10 a.m. Pacific (19:00 Central Europe) and will be streamed live on Chess.com/TV.

Streamers will start playing bots at exactly 10 a.m. Pacific Time (19:00 Central Europe) on Friday, December 4, and will race to beat as many bots as they can (and win bounty prizes) before time expires at 3 p.m. Pacific Time.

If a streamer defeats all the personality bots, then they will start battling the mighty Komodo engine, working their way up level by level until they reach the full strength engine.

As streamers complete various tasks, they will need to submit a clip of their achievement to the dedicated private Chess.com club for it to be considered for cash prizes.

To ensure all streamers have an equal start, all participants are required to create a new Chess.com account through the official tournament landing page prior to the event (must open in an incognito window). 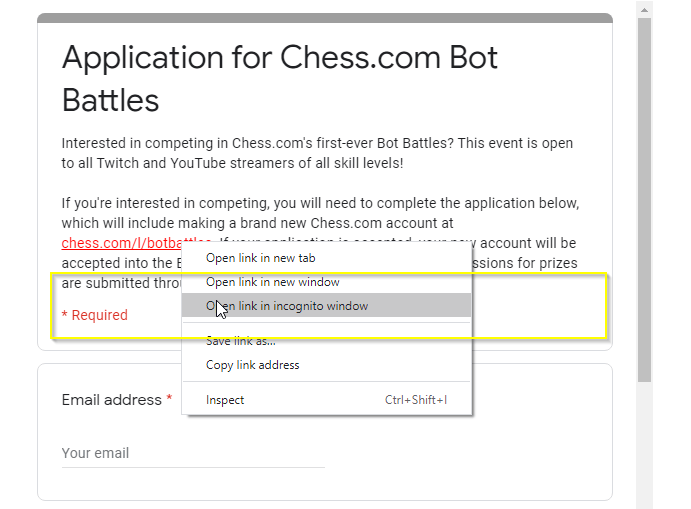 The username for this account must be specified in the application below. Players that beat bots prior to the universal event start time on this account will be automatically disqualified from all cash prizes.

To win prizes during the event, players will aim to complete the following objectives while streaming their Bot Battles. Upon completing an objective, players will clip their achievements to be considered for each prize.

Players will be sorted into sections based on their peak Chess.com blitz rating prior to the event.

All clips must include a window capture of the board, a window capture of the “results panel” (the grid with all of the bots), and a web camera. Players must earn three crowns when beating a bot to be considered a successful attempt. The clip submitted must demonstrate completion of the task, as well as the three crowns earned for beating that bot. Upon completing an objective, participants must submit their clip in the designated private club on Chess.com. Failure to submit the clip in the appropriate location may result in that clip being deemed ineligible.

Fill out the application below to be eligible for the Chess.com Bot Battles event. Players must stream with a camera and window capture of their browser in order to compete for prizes. To be eligible for cash prizes, streamers must create a new Chess.com account through the tournament’s official landing page (open in incognito) prior to the event.

The Chess.com Bot Battle will be broadcast live on Chess.com/TV, Twitch.tv/Chess, and Youtube.com/Chess on December 4 at 10 a.m. Pacific Time (19:00 Central Europe).