Initially, the predictions before the match by @SmarterChess seemed way off. Duda was going to win the five-minute portion 5-4? And he would win the bullet segement with a big margin, thereby having a 77 percent overall win probability?

It was tempting to throw those statistics into the bin when Caruana won the first three games and was leading 4-1 after two more games. But then Duda suddenly won four games in a row to reach the predicted 5-4 after all.

The three-minute segment ended in a tie (also as predicted!) after which Duda indeed showed his superiority in the bullet. He won that segment with a smashing 8-1 score.

As said, it was smooth sailing for Caruana early in the match. He won two games as Black using the French Defense and also outplayed his opponent in his white game:

“I was hoping to make a mark in the first two segments,” said Caruana. “I was starting out well and I guess Jan-Krzysztof was not yet fully adjusted at the start and then he started to get his form.”

Game four was an important one in the match because Caruana also reached a winning position there. He used the rare move 6.h4 against the Najdorf, which he would play four more times in the match.

Caruana had only four seconds left on the clock for what was not an easy winning continuation:

Caruana won the next game but that would be his last win in the five-minute segment. Duda made 4-2 in another 6.h4 Najdorf as he quickly won an exchange and found a nice final touch. Commentator GM Maurice Ashley quipped: “Come on man, be nice, show some respect!”

Duda took the lead for the first time in the last five-minute game. In another French, he switched to 5.Pce2 for the first time and that setup would serve him well for the remainder of the match. Caruana had no chance in this game and @SmarterChess was right!

“I probably just shouldn’t have played the French so much,” said Caruana. “It worked out at the start but then I was getting these strategically awful positions and basically, it was a complete disaster around that point.”

After a small break, Caruana started with a win in the first three-minute game. It still seemed anyone’s match. However, the American’s unfortunate loss in the next game was an early indication of what we would see in the bullet.

Amazingly, the first draw only came after 13 decisive games, when Duda suddenly switched from the Najdorf to the Petroff. Caruana then did the same and also played the Petroff, which was another draw—but definitely not because of the opening.

The three-minute segment ended with four draws in a row when the score was 9-8 for Duda. Any last hopes for the American player were quickly blown away as the Polish grandmaster won the first four bullet games.

Especially the second of those four was painful for Caruana, who was completely winning earlier:

Game 21 was another one of those typical bullet time scrambles. Caruana probably didn’t even want to know that he missed a mate in one twice, and also a mate in two…

This author doesn’t want to give the impression that Duda was only lucky. He simply played very strongly (and fast!) in a lot of games, such as the last, with which he finished the match in style:

Afterward, the winner wasn’t even sure he had played so well. “I thought I was extremely lucky today in the bullet because I was winning games that were equal or worse for me or sometimes even lost.”

His three losses at the start hadn’t come as a surprise: “I knew that the beginning of the match might be very difficult for me. I didn’t expect zero out of three of course but usually I start with losing a game in these matches. I played quite badly in those games obviously but afterward, I was kind of getting into the match.” 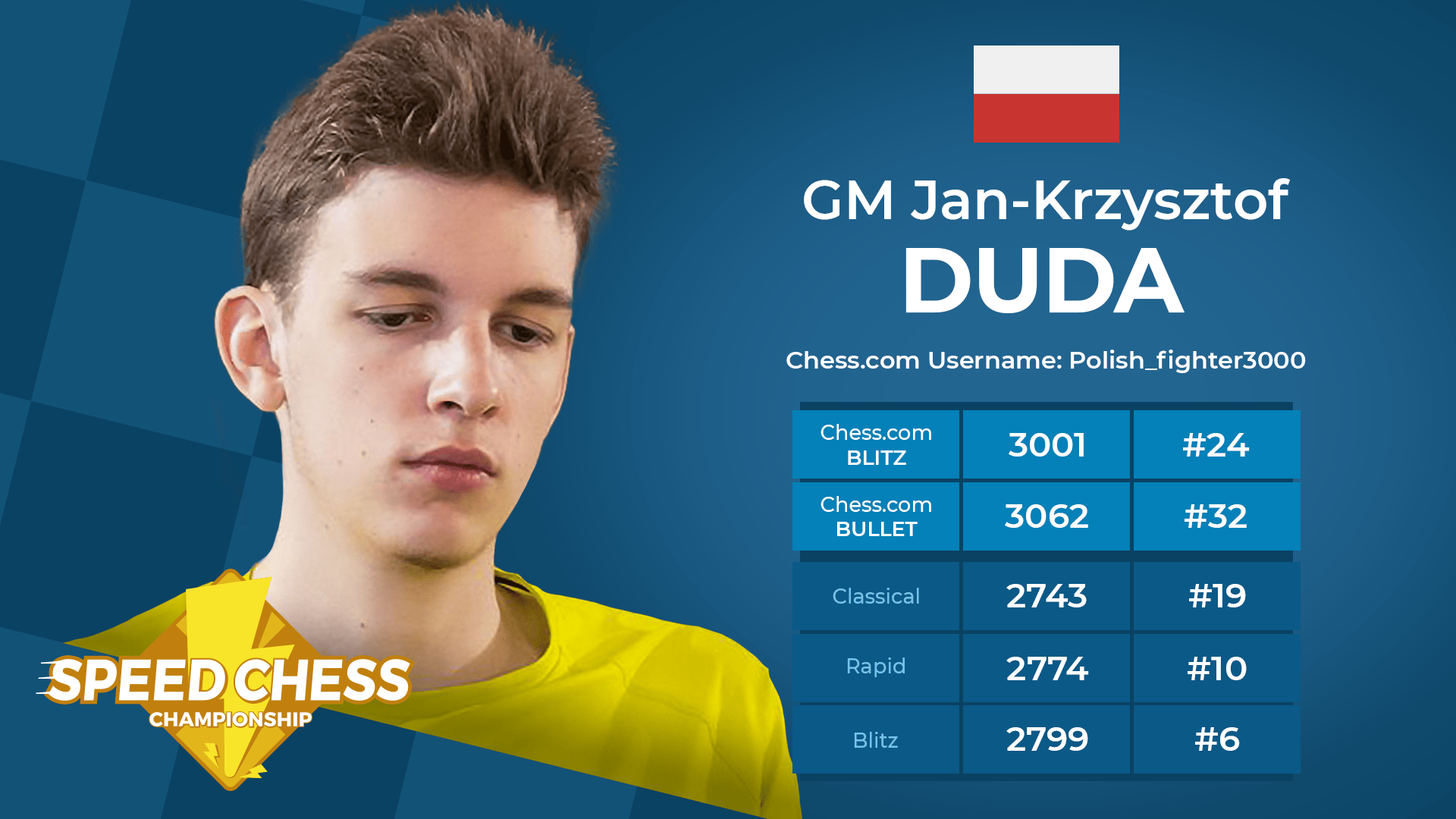 The American player, still the world number two in classical chess, agreed with the commentators that bullet is not really his thing and that he never had much interest in it. He didn’t prepare for it either, saying: “I don’t think I’m going to improve massively by playing a few bullets games before the match. I’m just panicking when I’m down to seconds and this is not a thing you can really correct in a day or two.”

Duda did prepare. He agreed that winning the Speed Chess Invitational helped and he also played lots of bullet before the match. “To be in good shape you have to play bullet it all the time,” he said.

There’s one remaining match in the round of 16. Details for the quarterfinals will be announced soon. 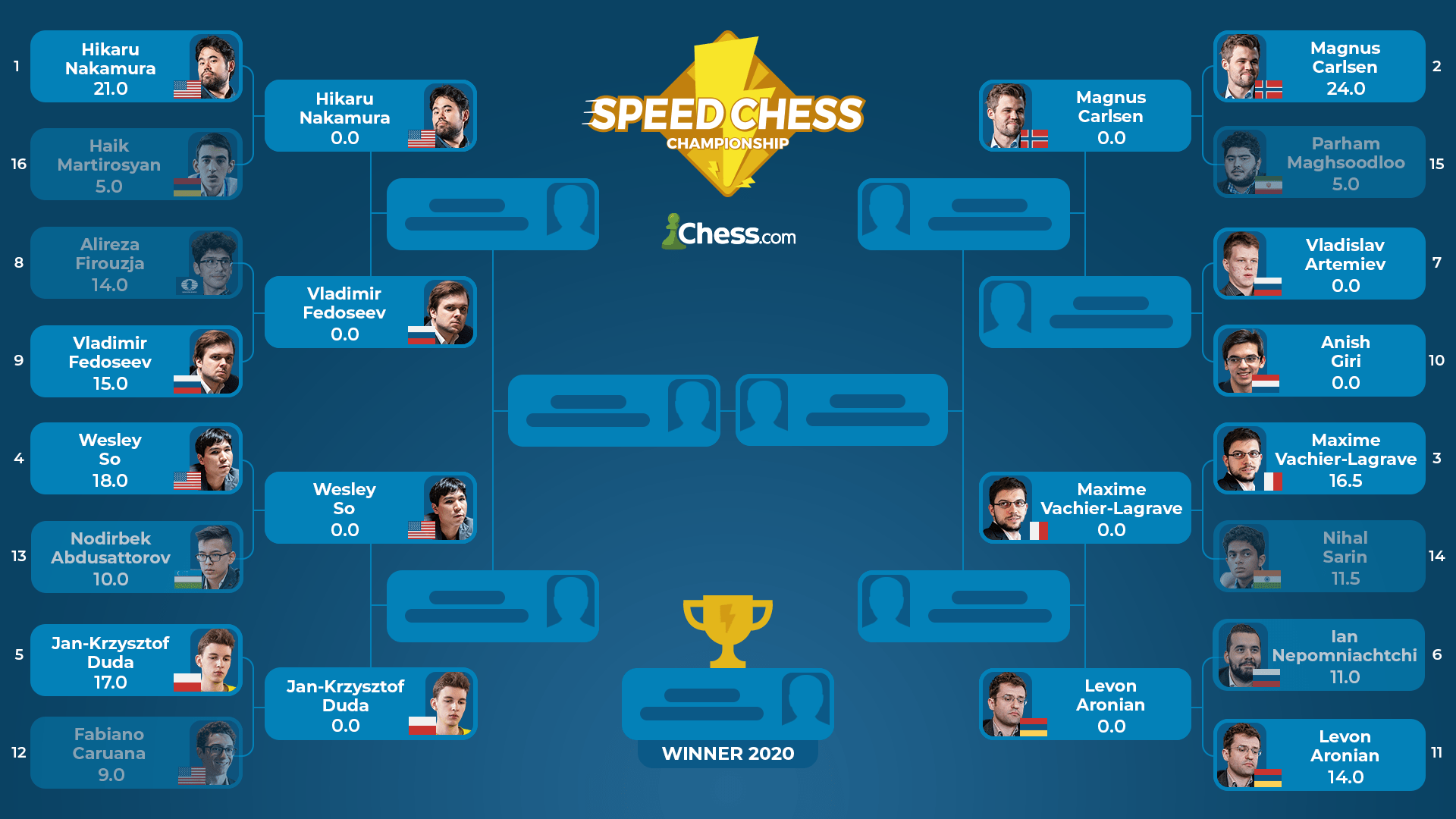 Which teams are playing each other?

Battle of the Minds: 4 legends compete in chess and poker