ENGLEWOOD, Colo. — Many things can be found in the 357 days between Denver Broncos quarterback Drew Lock‘s two starts at Arrowhead Stadium.

There are wins and losses, a few touchdowns and wow plays, more interceptions than he’d like, a shoulder injury, an offseason canceled because of COVID-19 and a missed game because he didn’t follow pandemic protocols. The question — for both Lock and the Broncos — is this: How much progress was made, and how much more can Lock make in the 26 days to come?

“Personally, I feel like I’m seeing [progress],” Lock said Sunday after completing 15 of 28 passes for 151 yards with two touchdowns and two interceptions in a 22-16 loss to the Chiefs. “So I try to see it better and better each week. I know I’ve been seeing it — of course, when you’re seeing it with your own eyes — but feeling the game, dealing with what these defenses are doing and how they’re trying to stop us. [I’m] definitely farther along and feel better than I did a year ago coming here.”

When Lock lined up behind center at Arrowhead on Dec. 15, 2019, the theme was optimism. It was his third career start, the third of five starts to close the season. The Broncos went 4-1 in those games. On Sunday, Lock was coming off a missed game after the Broncos were left without a quarterback because of violated COVID-19 protocols. There is growing concern in Denver about Lock’s interceptions and general impatience about how long a young quarterback should get to try to figure it out.

“We’ve got to cut down on the interceptions, obviously,” head coach Vic Fangio said. “We just need to see the continued improved play, and I think converting the third downs [Sunday] night showed that a little bit. We had a good day in the red zone. That shows development in a quarterback. Just need to make good throws, good plays, good reads, run the offense from the start of the huddle to the line of scrimmage. You know, we’re not always spot-on right there, and we need to be. I think Drew’s got [it] in him, and we’re going to keep working with him on that.”

The Broncos played it close Sunday, but Lock threw his 11th and 12th interceptions of the season and had his fourth game since returning from a right shoulder injury in Week 5 in which he didn’t complete more than 54% of his passes.

“We came out, and we didn’t stop playing until the whistle. That’s about the only moral victory I’ll take tonight because there really aren’t any,” Lock said. “I’m proud of the way we fought through this game and kept — we were always in it, we always had belief. Every time I walked into the huddle, I looked into the guys’ eyes, and I could tell there was belief.”

Broncos president of football operations/general manager John Elway has said little publicly about Lock. But with the team likely missing the playoffs for the fifth straight season — and with a talented, young roster of offensive skill position players — Lock’s final month will go a long way in deciding his future.

That’s especially true if the Broncos don’t have much success in the final four games and end up picking in the prime real estate of the 2021 draft — top 10 — in which the best quarterback prospects are often selected.

One enormous chip on Lock’s side of the table is that change has certainly not worked for the Broncos. For a variety of reasons, including injuries, Lock is the ninth quarterback to start a game since the middle of the 2017 season. Pat Shurmur is the fifth offensive coordinator, and Mike Shula is the fifth quarterbacks coach in the past five years.

In short, the Broncos have not had the same quarterback, offensive coordinator and quarterbacks coach in back-to-back seasons since 2013-2014.

There is also the matter of making judgments about big-picture items during a pandemic season when the Broncos had Von Miller, Courtland Sutton and Jurrell Casey — three Pro Bowl players — on injured reserve before Sept. 28. Lock, because of his right thumb injury in the 2019 preseason and the lack of on-field work because of COVID-19, has not had a full offseason program with the Broncos. 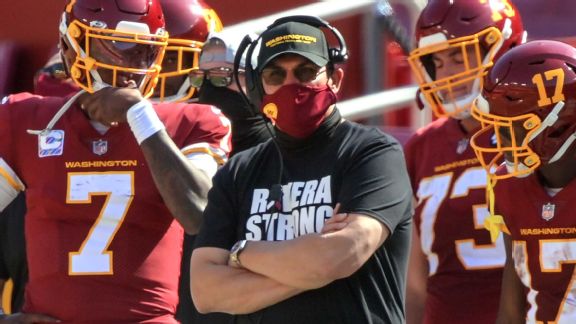 That, Shurmur has said, meant a loss of “over 1,000” snaps. When asked in the days leading up to Sunday’s loss to the Chiefs what he wanted to see from Lock down the stretch, Shurmur said, “Each week, he’s just got to get better in everything that he does. I think as he gets more and more consistent with everything that he does, then it’ll show itself. I think that’s where he’s at. He’s a young player. He’s kind of a ‘rookie-plus’ player right now.”

Over the Broncos’ final four games, they will play two teams — the Panthers and the Chargers — in similar straits and two — the Bills and the Raiders — with playoff aspirations. None of those four teams is currently among the league’s top 15 in scoring defense, and three of them (Bills, Panthers and Raiders) are ranked 19th or worse in pass defense.

Lock continued to get public support from his teammates Sunday, especially from wide receiver Tim Patrick, who caught both of Lock’s touchdown passes against the Chiefs.

“This is the Kansas City Chiefs at the end of the day,” Patrick said. “He responded like how we knew he’d respond. He’s a big-time playmaker, a big-time leader and a big-time quarterback. Not for one second did we think we were going to lose that game because we knew they couldn’t stop us.”

In the weeks and months to come, those who make the decisions for the Broncos will have to show if they agree.

5 things to watch in Bitcoin this week By Cointelegraph